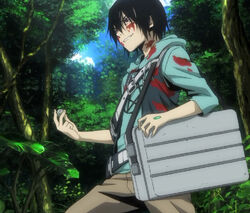 An important event during the real life Btooom! game is the regular dropping from cargo planes of edibles and supplies inside protective briefcases.

Such droppings have happened at least three times[1] and are usually a source of hope, dispute and conflict, because their contents are valuable itens that all participants crave in order to survive and have a measure of confort. On at least two separate occasions[2][3] a dropped briefcase became lure for a deathtrap.

The supply cases seem to have been fairly consistent so far. In each case, they consisted of a single case securely attached to a mushroom-style parachute by a sophisticated device. The briefcases appear to be solid and fairly protective. The contents usually include a few bottles of drinkables (including vodka in an early dropping), varied food itens, some emergency medicine and assorted utility itens such as suntan lotion, body wash,[4] flashlights and rope.

The droppings are usually of at least pair of briefcases at a time (Chapter 6 Page 16 shows at least three parachuted briefcases at the same time). Since they are carried by the wind and dropped with a significant time interval (apparently by design), it is usual for them to reach the island at a considerable distance from each other[8]. There is no guarantee that any or all of the briefcases won't be blown away from the island by the wind.[9]

Notes: There is no official name for this event or items in the manga series.

Retrieved from "https://btooom.fandom.com/wiki/Supply_Package?oldid=9229"
Community content is available under CC-BY-SA unless otherwise noted.